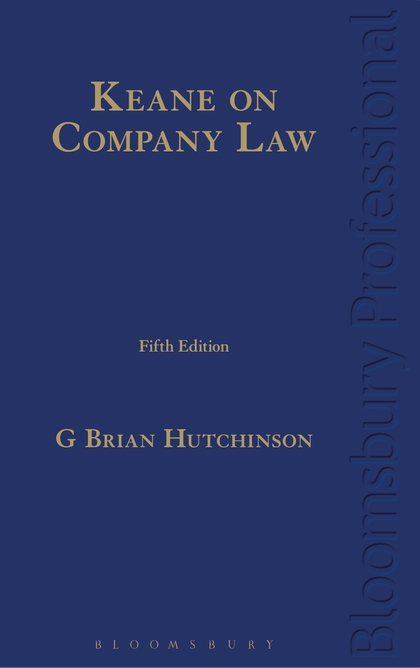 About Keane on Company Law

Keane on Company Law, Fifth Edition (previously: Company Law by Justice Ronan Keane) covers the Companies Act 2014 and is essential reading for students, solicitors and barristers alike. This latest edition of Judge Keane’s highly regarded text on Irish company law is substantially revised and updated to cover the Companies Act 2014, as amended up to October 2016, and also covers the many developments in the case-law since the fourth... Read more

About Keane on Company Law

This latest edition of Judge Keane’s highly regarded text on Irish company law is substantially revised and updated to cover the Companies Act 2014, as amended up to October 2016, and also covers the many developments in the case-law since the fourth edition was published in 2006.

Hardly any aspect of company law is left untouched in some way by the 2014 Act. The Act not only repeals the prior Companies Acts and replaces them with a consolidated code, but also introduces many innovations designed to make companies more accessible to those doing business, and to streamline corporate compliance and procedures. The Act creates two new forms of private company: the private company limited by shares (LTD), which enjoys concessions not previously available to private companies, and the designated activity company (DAC) which more closely resembles to private company known under the former legislation. It also overhauls the requirements relating to other forms of company, namely PLCs, guarantee companies (CLGs) and unlimited companies, while also clarifying and extending the obligations of external companies which operate in Ireland. Among the key changes are the effective abolition of the ultra vires rule, which has applied to all companies up to now, and changes in the requirements relating to the constitutions of companies. The Act also changes the rules regarding company capital, and makes significant changes to the law concerning: the registration of company charges; the conduct of windings up; the passing of written resolutions; and the approval of certain transactions which previously were either prohibited or required Court approval, by a new Summary Approval Procedure involving a special resolution combined with an appropriate declaration by the directors, subject to safeguards to prevent improper use. The Act also codifies the previously common-law fiduciary duties of directors, and substantially modifies the regime regarding disclosure and approval of transactions involving directors. The Act also introduces new procedures whereby Irish companies can be merged or divided. Recent amendments to the Act have added further requirements regarding statutory audit and auditors; and impending changes (addressed in this edition) will alter the regime governing annual financial statements and impose filing requirements on unlimited companies.

Meanwhile the courts have been busy, particularly in the areas of restriction and disqualification of directors, and examinership, but also notably in the areas of company charges, reservation of title, financial assistance in the purchase of shares, to mention but a few.